Salt Lake City reports the 2026 Winter Olympic Games would have a $1.6 billion operating budget and an economic impact greater than $5 billion.  Currently, the City has a budget of approximately $1 million to pursue a bid as the U.S. Candidate City.  If Salt Lake City is selected as the U.S. candidate, the budget will likely grow to over $25 million to compete internationally.

Salt Lake City, Denver, Reno and Bozeman, Mont. have expressed interest in bidding for the 2026 Games.

The USOC will report on its bidding intentions for the 2024 Summer Games and 2026 Winter Games this week.  Read more.
Email ThisBlogThis!Share to TwitterShare to FacebookShare to Pinterest
Newer Post Older Post 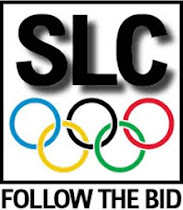